Vessel Akademik Boris Petrov is back in the ranks

In the Chinese port Tianjin the repairs of the the research vessel Akademik Boris Petrov have been completed. The ship with a crew of scientists on board set sail into a scientific voyage. As the head of the Scientific Coordination Oceanological Center of P.P.Shirshov Oceanology Institute of the Russian Academy of Sciences Sergey Shapovalov noted, due to this voyage Russia is resuming investigations in the Indian ocean after a long break. 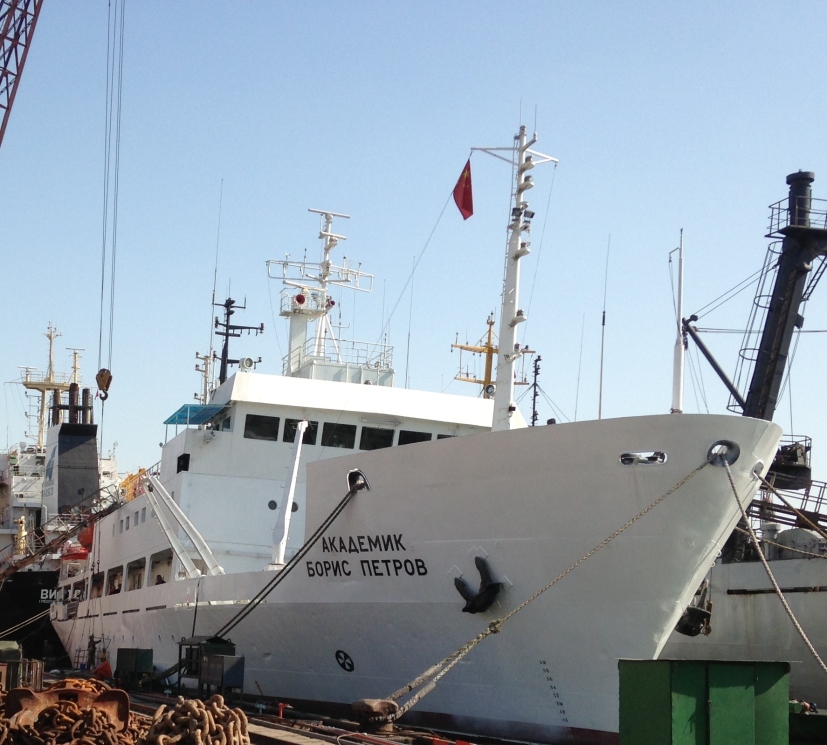 On 5 January 2017 after four years’ repairs on the shipyard of the city of Tianjin (PRC) RV Akademik Boris Petrov (voyage No.42) went on an expedition. In the expedition a wide range of works is scheduled the main part of which will be conducted in the Indian ocean. The integrated research, geophysical, gas and geochemical, geological, hydrophysical, meteorological, hydrobiological, and environmental, will be conducted in the region of the East Indian ocean ridge. Two meridional hydrological sections on Tareev equatorial countercurrent are also scheduled.

All this research will be a contribution of Russia into a large international project, the Second International Indian Ocean Expedition (IIOE-2) performed under the aegis of the Scientific Committee for Oceanic Research (SCOR) and the UNESCO Intergovernmental Oceanographic Commission (IOC/UNESCO) in 2015-2020.

The expedition was organized by the Council for Earth’s Hydrosphere of the Federal Agency for Scientific Organizations. The expedition is headed by the Senior Research Scientist of IO RAS O.V. Levchenko. The scientists of P.P.Shirshov Oceanology Institute of the Russian Academy of Sciences, V.I.Ilyichev Pacific Oceanological Institute, and the Institute for Automation and Control Processes of the Far East section of the Russian Academy of Sciences, and of A.O.Kovalevsky Institute for Marine Biological Research of RAS (Sevastopol) and V.Ye.Zuyev Institute for the Optics of the Atmosphere of the Siberian section of RAS are taking part in the expedition.

The modern scientific apparatus will allow the geological and geophysical features of the East Indian ocean ridge, the structures and dynamics of the equatorial currents to be studied, hydrobiological, gas and geochemical mercury research along the entire course of the vessel to be performed. Immediately after the entry of the Yellow sea the measurements of methane contents, hydrochemical parameters of the water column surface layer, and atomic mercury concentrations in the atmospheric surface layer were started, weather observations are conducted, and the equipment for work in deep water regions adjusted.

The duration of the expedition will be 85 days, during which time it is planned not only to perform the basic Indian ocean work program, but also to pass with associated measurements through the Red sea, the Suez Canal, the Mediterranean, the Strait of Gibraltar, along the Atlantic coast of Europe, through the North and Baltic seas, finishing the expedition in the port of Kaliningrad.

BACK
All rights reserved © Copyright 2016 – 2022.
The material published within this website is copyright of the company. No part may be used, in whole or in part, without the permission of the administration.