"A TAG", a new film from IO RAS video studio

At the IV Festival "Primordial Russia" held under the aegis of the Russian Geographic Society in the Central House of Artists in Krymsky Val, a new film from the IO RAS Video Studio, "A Tag", was shown 21 January 2017. 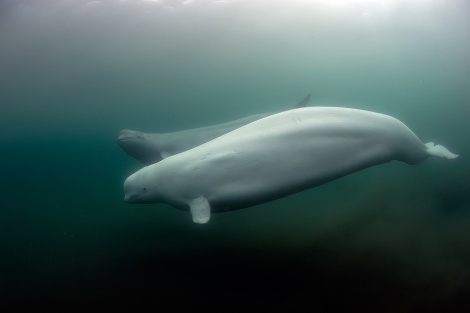 The film relates the expedition to Shokalsky Island in which the Institute’s workers participated. The expedition has been organized by the Marine Mammals Council. During its activities satellite tags on white whale and seal were put. Difficulties were caused not only by the variable and gloomy weather of an arctic summer but also the lack of experience in conducting work in this little known region of the Arctic. The unusual scientific success of the expedition was secured by the successful effort of an operator of IO RAS Video Studio, Maksim Tolstoy as well.

Quadrotor helicopters were actively used in the shooting. A video drone had an unexpected vivid reaction from polar bears who annoyed the expedition’s members. It turned out that bears are in panic when a small, but rapid and noisy mechanical device is hovering above them. The footage of bears running away from the drone is an amusing and instructive episode of the film. The Central House of Artists in Moscow saw a premier of the documentary film of the Video Studio of P.P.Shirshov Oceanology Institute of the Russian Academy of Sciences under the title "A Tag". The story of the film is based on the research done in 2016 in Shokalsky Island in the Kara Sea.

The expedition was organized by the Marine Mammals Council in which workers of the Oceanology Institute took part. For the first time in this region the scientists managed to put satellite tags on white whale and ringed seal. As the participants of the shoots note, the biologists faced quite a complex problem. Difficulties were caused not only by the variable weather of an arctic summer but also the lack of experience in conducting work in this little known region of the Arctic. As the film’s author and director Vladimir Marin tells, on foul days the island was literally flooded by the Kara Sea, on account of which the researchers had to wait days in a row in cabins on piles till the water receded. High humidity often caused failures of the equipment, and it had to be repaired. Vladimir Marin is the head of the video studio of IO RAS, laureate of festivals of popular science and documentary films "Laurel Branch" (short list), "Golden Champion", "Man and nature", "Rendezvous with Russia", "Golden Dolphin", "Man and War".

His work "The White Runaway’s Mystery" about the fate of the white whale Yegor from the Moscow Dolphinarium was acknowledged the best film on adventures at the IХ International film festival "The Sea Calls 2012". Despite the extreme conditions of the shooting, says Marin, the places where the action of the popular science film takes place, presented a doubtless interest due to variety of the wild arctic fauna. Polar bears, bearded seals, and birds also came in sight of the scientists and the shooting crew.

The film’s trailer can be seen here. The film was presented to the wide audience at the all-Russian festival "Primordial Russia". The Russian Geographic Society supports research in marine mammals within its environmental projects. Thus, for instance, in cooperation with the Marine Mammals Council, A.N.Severtsov Institute of Problems of Ecology and Evolution of RAS, the Oceanology Institute of RAS two populations of white whales in the Sea of Okhotsk and the White Sea are studied.

BACK
All rights reserved © Copyright 2016 – 2022.
The material published within this website is copyright of the company. No part may be used, in whole or in part, without the permission of the administration.