On board the vessel the researchers performed investigations in various spheres of science. Using special apparatus, the sea bottom was studied. The experiments were conducted both in open sea and on Novaya Zemlya archipelago. In this expedition the scientists awaited the meeting with the severe Arctic and its inhabitants. Speaking is Nikolay Andreyevich Rimsky-Korsakov, doctor of technical sciences, head of the Laboratory for submarine sound ranging, head of director of P.P.Shirshov Oceanology Institute: “The 2015 expedition to the Kara sea left Arkhangelsk, and its main purpose was to study the ecology of the Red sea, the ecology of the bays of the Kara sea in the presence of burials of radioactive wastes, and to conduct ecological and above all resource investigations in the Laptev sea”. 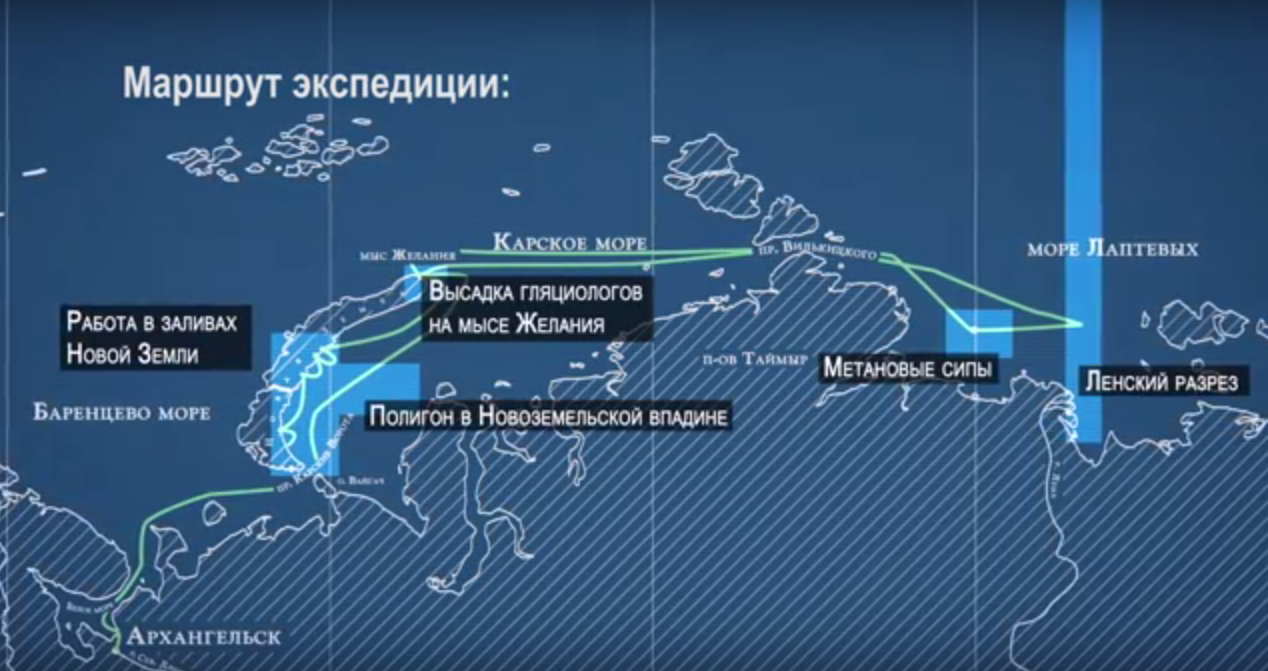 The goals of this group of workers who worked directly under the state contract of the Ministry of Emergency Situations of Russia were to precise the locations of potentially hazardous objects, namely burials of solid radioactive wastes in the bays of Novaya Zemlya and in Novaya Zemlya depression, to survey these objects, to determine the radiation background of the adjacent territory. In this connection one of the main goals is to control those protective barriers which separate the radioactive substance from the environment. The technique of surveying underwater potentially hazardous objects, not only radioactively but chemically hazardous ones includes several stages.

The first stage works are performed when the precise location of the object is unknown, but what is known is the approximate region according to archival data. In this case submarine sound ranging is used. And in the first place side scanning sonars, to search for these object and clarify their locations. Our expedition confirmed two such places of burials of solid radioactive wastes in the form of containers in Sedov Bay and Oga Bay.

After the object is identified, what follows is the stage of evaluation of its hazard level, i.e. measurements are taken using gamma spectrometers – in this way radiation hazard is determined. Underwater gamma spectrometers are installed on remotely controlled devices, and targeted measurement is taken. The method of taking samples of soil around the object is used, which allows the level of contamination of the bottom sections adjacent to the object to be determined.

One of the methods of condition monitoring of radiation background near objects is the use of self-contained underwater radiation monitoring devices. These devices in the form of a subsurface buoy are installed near a potentially hazardous object and, within an extended period (as a rule, once a year), control  the radiation background near the objects. Our expedition had to raise three such devices installed in 2013 in the course of the other our research expedition on the vessel Professor Shtokman. The buoys were rather successfully raised. All facilities were used in it: a boat, a remotely piloted vehicle, and the vessel itself. All this enabled us to raise the buoys without accidents, to bring them to Moscow and deliver them to the Ministry of Emergency Situations of Russia.

Apart from the research of underwater objects, during the expedition the radiation background on the coast was monitored: workers were put on the shore where they conducted a radiation survey that also showed the satisfactory condition of the radiation environment. What can be said by the results of the investigations? Nowhere in the bays studied by us in the places where we were, excessive radiation background was detected. Generally, one can say that the radiation environment in the bays of Novaya Zemlya and in Novaya Zemlya depression is satisfactory. No impact of submerged objects with solid radioactive waste on the ecosystem of the district was found.

It is pleasant that, apart from the routine work of monitoring and radiation measurement, we have managed to make certain small discoveries, including identification of submerged vessels in Novaya Zemlya depression and confirm the burials in Sedov Bay and Oga Bay».